The recent decisions of the Warsaw Summit to amend its Readiness Action Plan (RAP) by increasing NATO’s military presence, emphasized the strategic importance of the Baltic States.
NATO’s CIMIC Centre of Excellence (CCOE) in The Hague (NLD), is acting suit with a comprehensive Civil-Military Cooperation expert whistle-stop tour to the Baltic Republics from October 6th – 12th, 2016.

Led by CCOE Director Colonel (GS) Wolfgang Paulik, the team will meet with key partners in collective defense in all three countries. 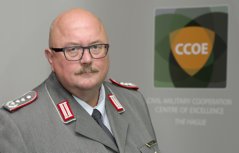 “CIMIC is supporting the collaboration between sovereign nations. In times of crisis and conflict, NATO, according to its Readiness Action Plan is fully prepared to support the Baltic NATO member states in preserving their territorial integrity and by facilitating a safe and secure environment. This will ensure the resilience of the legitimate owners of civil authoritiy in the sovereign societies of the Baltic Republics.

While NATO is very good at achieving its military objectives in armed conflicts, it also takes a comprehensive application of Civil-Military Cooperation benchmarks to also secure the peace” says Colonel Paulik.

The multi-national CIMIC delegation from The Hague will have meetings with civilian, institutional and military stakeholders in Civil-Military Interaction in all situated in the three partner republics.

Already, the CIMIC COE provides subject matter expertise on Civil-Military Interaction and Civil-Military Cooperation, for the three NATO Force Structure units in Muenster (1. German-Netherlands Corps), Ulm (Multi-National Joint Headquarters) and Stettin (Multinational Corps North-East), which have been earmarked as integral part of the NATO Readiness Action Plan for the defense of the Baltic States.

Latvia, as a spearhead, is already a

sponsoring nation of the CIMIC Centre for ten years.
With his dialogue partners, Colonel Paulik will discuss perspectives and options to further enhance Baltic NATO Civil-Military Cooperation. This is driven by the understanding that only common structures and a common understanding of tasks provide for the pre-conditions for effective collaboration in times of crisis. A leveraged engagement in NATO CIMIC and the CCOE will further strengthen the onsite resilience in issues of hybrid warfare, Civil-Military Interaction and collective defense.

On the occasion of the annual NATO Conference of the Directors of the Centres of Excellence in Vilnius, October 4th – 6th, 2016, Colonel Paulik will initially present the Baltic NATO CIMIC Initiative. It is overall directed at strengthening the mutual assurance assistance of the NATO partners in Civil-Military Cooperation.

The CCOE in The Hague, Netherlands, is a multinational sponsored, NATO accredited, Centre of Excellence. It provides added value, innovative and timely advice, and subject matter expertise on Civil-Military Cooperation for both civilian and military customers. The primary focus of the center is on enhanced training & education of civilian and military personnel in Civil-Military Interaction, conceptual and doctrinal development of CIMIC in NATO and Lessons Learned from all NATO missions.