The concept of Rule of Law is something to achieve for all states, not just for fragile or failed ones. However, one of the main characteristics of failed and fragile state is a weak or non-existent Rule of Law. When a state is fragile or failed because of conflict, building the Rule of Law poses many challenges. Domestic state institutions in these states often suffer from the demolition of physical infrastructure. This usually results in a lack of educated law professionals and a rapid spread of crime and corruption, facilitated by insecurity and low law enforcement capacities. Next to that, government staffs are threatened by conflicting parties, and there can be difficulties in identifying and implementing adequate responses to human rights violations that have occurred in the course of a conflict. 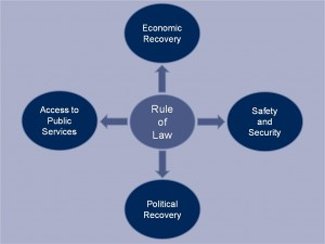 International military forces and international and non-governmental organisations face these issues when they try to support a host-nation’s state institutions in stabilizing the country and establishing the Rule of Law. However, there is a tendency among different actors, with diverging mandates and capacities, to implement their own Rule of Law strategies with little or no coordination between each other. Therefore, there is a real need for cooperation with the host nations’ institutions as well as between the different actors (both military and civil) that operate in a certain Area of Operations.

Definition of Rule of Law

Unfortunately, there is no common definition of Rule of Law. Many IOs, NGOs, governments, lawyers and judges associations, policy think-tanks and private foundations are engaged in promoting the Rule of Law and most of them view Rule of Law in different ways. However, when looking into this topic, the UN definition is a good starting point as it offers a very broad definition which has infused other definitions of many other Rule of Law actors:

The rule of law refers to a principle of governance in which all persons, institutions and entities, public and private, including the State itself, are accountable to laws that are publicly promulgated, equally enforced and independently adjudicated, and which are consistent with international human rights and standards. It requires, as well, measures to ensure adherence to the principles of supremacy of law, equality before the law, accountability to the law, fairness in the application of the law, separation of powers, participation in decision-making, legal certainty, avoidance of arbitrariness and procedural and legal transparency¹.

CCOE and Rule of Law

Rule of Law, especially from a CIMIC point of view, is one of the topics CCOE deals with. Several CCOE courses contain a Rule of Law lecture, which is given by the CCOE Legal Adviser. Furthermore, in its Makes Sense series CCOE has published a document on Rule of Law: Rule of Law Makes Sense; A Way to Improve Your Mission. This publication demonstrates how CIMIC as a military capability can contribute to military or political missions concerned with Rule of Law objectives. A first step is to demonstrate the importance of Rule of Law and in what way this concept is related to current and future military missions. As Rule of Law is increasingly becoming of high interest and value of military operations the overarching aim of this publication is to demonstrate how CIMIC can contribute to Rule of Law activities during military missions. This process however needs the cooperation of both the military and civil actors. Therefore it is the intention of this publication to:

Rule of Law Makes Sense is available here or can be read directly in the viewer on the right-hand side of this webpage.