Military operations require clearly understood and widely accepted principles as a common conceptual background. This is especially important when operations are conducted by allied or coalition forces. Within the NATO, Allied Joint Publications (AJPs) provide these fundamental principles by which the military forces guide their actions in support of objectives. These publications have joint interest containing doctrine applicable to NATO-led multinational forces, conducting operations involving more than one service. 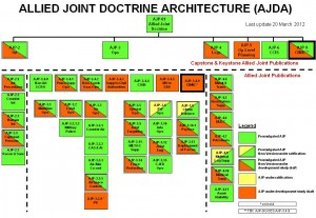 AJP-9, as NATO Civil-Military Cooperation (CIMIC) Doctrine, was developed by Supreme Headquarters Allied Powers Europe (SHAPE) and it was introduced in June 2003 in order to meet the requirements of The Strategic Concept (1999), which went on to state: “The interaction between Alliance forces and the civil environment (both governmental and non-governmental) in which they operate is crucial to the success of operations”. Indeed operations have underlined the requirement to coordinate activities with national and local governments as well as both International Organisations (IOs) and Non-Governmental Organisations (NGOs). CIMIC, as NATO capability was established to support the Commander in achieving this.

The Doctrine rested with SHAPE till October 2008 but because of NATO transformation including shifted responsibilities, Civil-Military Cooperation Centre of Excellence (CCOE) was tasked by NATO Allied Joint Operations Doctrines Working Group (AJOD WG) to take over the custodianship. Responsible for the development and updating of AJP-9, CCOE as custodian started a revision immediately in order to streamline its content reflecting all of the needs of the dramatically changed operational environment.

CCOE executed a drafting process applying a truly comprehensive approach mindset, inviting all interested NATO member and relevant non member states, NATO and non NATO Command Structure Headquarters and major Civil Actors (IOs and NGOs) to actively participate in the drafting process. In addition CCOE got the opportunity to participate in the Combined Custodial Review (CCR) in order to coordinate within the development process of the other NATO Capstone and Keystone publications to the widest extent possible. After completing and circulating AJP-9 Study Draft 1 (SD1), based on the number and substance of the comments, the responsible tasking authority (AJOD WG) decided to support entering ratification after completion of a Study Draft 2 (SD2).

CCOE incorporated all of the comments from the nations and different NATO entities and finalised AJP-9 SD2 in September 2010. Before the distribution of the publication within NATO doctrinal community the process has been halted due to the discussion on positioning of CIMIC doctrine within the Allied Joint Doctrine Hierarchy.

In February 2011, AJOD WG declared revised AJP-9 mature enough for circulation as SD2. Nations opted for AJP-9 as “level-2” document and there was a consensus to restart the process and circulate the doctrine as AJP CIMIC SD2 in May 2011.

The commenting phase on AJP CIMIC SD2 was closed in September 2011. All received comments have been incorporated by CCOE in due time. The AJP-3.4.9(A) Ratification Draft (RD) has been sent to nations for ratification on 07 March 2012 by NATO Standardization Agency.

The AJP-3.4.9(A) Allied Joint Doctrine for Civil-Military Cooperation Edition A version 1 was finally promulgated on 8 Febr 2013.

The new doctrine was harmonised horizontally and vertically in the NATO Allied Joint Doctrine Hierarchy (AJDH) which gives complete implementation of the new Capstone (AJP-01) and Keystone (AJP-2, -3, -5) doctrines as well as the CIMIC related functional areas. The involvement of civil stakeholders and the declassification of the publication fundamentally support NATO contribution to a Comprehensive Approach. With this new doctrine CIMIC has been upgraded and sharpened in order to meet the current and future requirements of the operational environment in a better way.