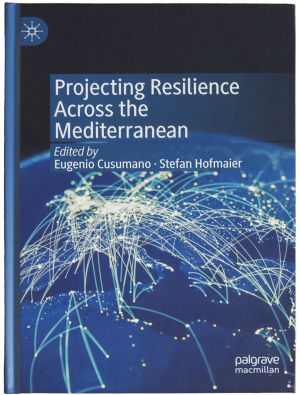 Projecting Resilience Across the Mediterranean
By Eugenio Cusumano & Stefan Hofmaier

“The previous volume sponsored by the Civil-Military Cooperation Centre of Excellence (CCOE) mainly focused on hybrid threats at NATO's Eastern flank. This new book offers an insightful analysis of resilience-building initiatives at the Southern end of the Mediterranean basin, an equally topical subject with key implications for European security.” (Colonel Wolfgang Paulik, Director, NATO Centre of Excellence on Civil-Military Cooperation)

“A must-read for anybody interested in the Middle East, Maghreb and Sahel. Thanks to its in-depth strategic assessments, this book will help you navigate the complexity of these regions and better understand where and how the EU and NATO can prompt and sustain positive change” (Florence Gaub, Deputy Director, European Union Institute for Security Studies)

This book examines the strategies pursued by the North Atlantic Treaty Organization (NATO) and the European Union (EU) to foster resilience in the Middle East, Maghreb and Sahel regions, ranging from military operations to humanitarian assistance. Thanks to its constructive ambiguity, resilience can bring together policy communities and connect sponsors of reform with local societies, but also bridge rifts between and within the EU and NATO. However, existing resilience-based policies are fraught with policy, theoretical and normative dilemmas. This volume examines these dilemmas by including international relations, European politics and area studies scholars, as well as practitioners from armed forces, international organisations, humanitarian NGOs and think tanks.

Eugenio Cusumano is Assistant Professor in International Relations at Leiden University, The Netherlands.

Stefan Hofmaier is Lieutenant Colonel in the German Army, former Branch Chief at the Civil-Military Cooperation Centre of Excellence in The Hague, The Netherlands. 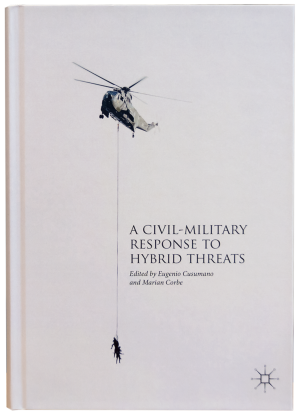 “Clear and well structured, the book achieves its aim. It will definitely become a reference point for those studying civil-military cooperation approaches to counter societal destabilisation. Given the common challenge of building societal resilience, the book is a call for academics and practitioners to further theoretical sophistication and empirical richness: together they are recognised as the only ways to avoid excessive complexity or vagueness in dealing with hybrid threats and hybrid warfare.” (Giuseppe Fersini, The International Spectator, Vol. 53 (3), 2018)

This edited volume provides scholars and practitioners with an in-depth examination of the role of civil-military cooperation in addressing hybrid threats. As they combine the simultaneous employment of conventional and non-conventional tools and target not only military objectives but governments and societies at large, hybrid threats cannot be countered solely by military means, but require an equally inclusive response encompassing a wide range of military and civilian actors.

This book, which combines the perspectives of academics, military officers, and officials from international and non-governmental organisations, resorts to different case studies to illustrate the importance of civil-military cooperation in enhancing the resilience of NATO members and partners against a wide range of societal destabilization strategies, thereby contributing to the formulation of a civil-military response to hybrid threats.

Eugenio Cusumano is an Assistant Professor of International Relations at the University of Leiden, the Netherlands. His research, published in leading security studies journals, concentrates on the role of non-state actors in military operations and humanitarian crises both on land and at sea.

Marian Corbe is the former Academic Advisor at NATO’s Civil-Military Cooperation Centre of Excellence in The Hague, The Netherlands, and an officer of the German Armed Forces. 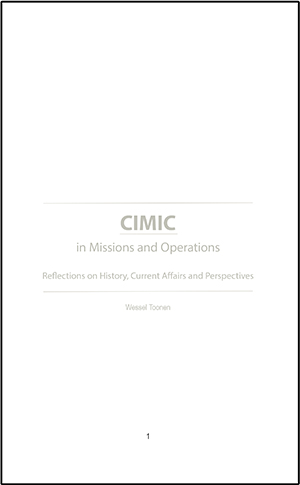 CIMIC in Missions and Operations

On one of his most memorable days in Afghanistan, it was the first time that Captain Jean-Michel Paquet of the Canadian Forces Base Valcartier went to the small village of Haji Gulan within the Kandahar Province. It was going to be a long foot patrol, between 9 and 10 km in total. His unit used a small path alongside the Arghandab river, which separated the Canadian monitored Panjawii district from the US-controlled Zhari district. There had always been many contacts on the other side of the river, and so the military men and women came prepared, as something clearly was about to happen. As he walked on, Captain Paquet could see many poppy fields, and found them very beautiful, despite being aware of their intended use. He remembered reading about Afghanistan’s scarce usable land, together with its low-income status even before a long cycle of violence had set it further back. Decades of war had indeed left Afghanistan’s people scarred and its state structures destroyed or neglected. This allowed for pervasive, entrenched and systemic corruption to shortly follow suit, which would go on to reach an unprecedented scope in Afghan history. How surreal it seemed, that even within this ravaged place, nature somehow still managed to produce beauty with such simplicity. While it puzzled him at first, the thought of those fields would soon begin to fill Captain Paquet with hope. 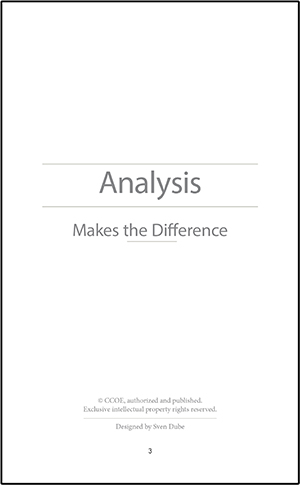 All of us intervening in conflict, crisis, disaster and the aftermath of those situations feel on a daily basis the complexities faced by the impacted communities and our responsibility to understand the impact of our actions both in the immediate and longer-term. Analysis and understanding of these environments, and I underline the importance of a “so what” and “recommendations” incorporated in that analysis, is our base line tool in ensuring positive interventions. I have been very inspired that the CCOE was prepared to show leadership in identifying that the world ever-expanding complexities mean we need to get better at analysis and to invest in bringing such a broad cross-section of the interventionist community together to do just that.

Crisis has an immediacy and operational tempo that favours the reactive. Decision making needs to be agile and well informed. Analysis cannot be an afterthought or add on, it needs to be sitting at the centre of decision making conversations, be that in planning and implementation or at the strategic, operational or tactical. I totally underline the Directors point above that we must move from “need to know” to “dare to share”, a mindset change required for all of us uniformed or civilian.

Be it Syria, Afghanistan, Mali, or any crisis, the current situation and history don’t change depending on the actors involved, but the lens that we view these crises through and the expertise that we bring vary enormously. All of our interventions impact economies, power balances, the security situation and the lives of the average citizen. Becoming aware of what the different actors bring in both action and knowledge be they military, humanitarian, stabilisation, development, political, or peacebuilding improves us all. We do not need to be so naive to believe that all actions will have the same purpose to understand the benefits of improved understanding.

8 Politics, communities and life are about people and relationships. This workshop began a process of bringing together professionals from many backgrounds to improve our individual and overall performance. That it is happening at a time where the UN is reforming its peace and security architecture with a focus on better analysis and better integration across the intervention spectrum reinforces the impact of the CCOEs leadership.