The Chairman for all the CoEs is about to change 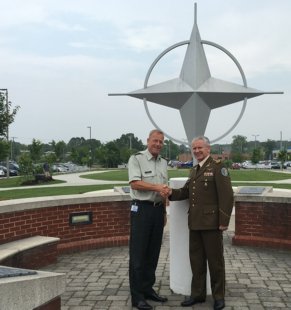 During their meeting, General Mercier highlighted his desire for significantly closer cooperation between ACT and the COEs, for making the most of COEs to advance NATO’s Transformation and for finding collective solutions to his priority areas.

The next day, Colonels Been and Bagdonas had a number of office calls to discuss the future involvement of COE’s in ACT’s strategic focus areas, including with Air Marshal Graham Stacey, Chief of Staff, Lieutenant General Jeffrey G. Lofgren, Rear Admiral Peter Gumataotao, DCOS Strategic Plans & Policy, Vice Admiral  Javier Gonzalez-Huix, DCOS JFT and Brigadier General Henrik Sommer, ACOS Capability Engineering & Innovation. All stressed the importance of continuing to strengthen the contributions of COEs and of fostering their engagement in SACT’s focus areas.

Collectively, the Centres of Excellence have a lot of potential to contribute to NATO’s evolution. Even if they stand outside the NATO Command Structure, COEs are closely linked to NATO’s Allied Command Transformation and play a vital role in NATO’s Transformation.