Welcome to the CIMIC Centre of Excellence

The CCOE is a multinational sponsored, NATO accredited, Centre of Excellence. It provides added value, innovative and timely advice, and subject matter expertise on CIMIC for both civilian and military customers. The primary focuses of the organisation’s effort are in conceptual and doctrinal development, lessons learned along with enhanced training and education.

To assist NATO, Sponsoring Nations and other military and civil institutions/organisations in their operational and transformation efforts in the field of civil-military interaction by providing innovative and timely advice and subject matter expertise in the development of existing and new concepts, policy and doctrine; specialised education and training; and the contribution to the lessons learned processes.

In 2001 CIMIC (Civil-military cooperation) Group North Headquarter (CGN HQ), was founded. By establishing an operational CIMIC Headquarters the Czech Republic, Denmark, Germany, The Netherlands, Norway and Poland followed a direct political requirement from the North Atlantic Council concerning the establishment of dedicated capacity for Civil-military cooperation. The events in the Balkans, which clearly showed the necessity for such units, triggered NATO´s request. The entire Group consisted of a deployable Headquarter (HQ) with dedicated CIMIC units and functional specialists assigned from the nations. The Group was intended to function as a Theatre-Wide multinational CIMIC unit to be used primarily in international operations, including in NATO Collective Defence Operations.

In 2003 the Group was formally activated in this function. Later it became clear that the operational use of the unit in a multinational context was not likely due to the changing operational environment of modern crisis response operations. It paved the way for a shift of its role into a CCOE (Civil-Military Cooperation Centre of Excellence). This appeared to be a unique opportunity because CGN HQ already had gained a lot of essential experience for such a CCOE by conducting CIMIC courses and serving as an essential forum for CIMIC issues and consultations since 2002. This theoretical expertise was complemented by the participation of the CGN HQ personnel in several CIMIC missions, such as ISAF.

In November 2005, the final decision on the transformation of the former CGN HQ into a CCOE was made by the Sponsoring Nations and supported by ACT and SHAPE. The Czech Republic and Norway withdraw their participation during this process.

The decision marked the start of a formalised accreditation procedure, which was concluded on 31st July 2007 when the North Atlantic Council granted the CCOE the status as a NATO accredited Centre of Excellence, with the status of an International Military Body, in accordance with Article 14 of the Paris Protocol.

In January 2008, Latvia joined the CCOE as a new Sponsoring Nation.

Since April 2010 Slovenia is a sponsoring member of the CCOE, and in Mai 2010 Hungary joined the CCOE as a Sponsoring Nation.

In July 2014, the Centre was moved from Enschede to the Dutch administrative capital of The Hague. Since then, the CCOE profits from the cities strategic advantages and accessibility to important stakeholders with international significance.

At the Community of Interest Workshop in April 2015 the CCOE not only introduced the CCOE Vision 2020, giving insights on the scope and goals for the upcoming years but also displayed it´s new and today’s corporate design, visible across all communication tools.

On the 10th October 2017, the CCOE celebrated its 10th anniversary at its premises in The Hague. The celebrations content was shaped by the motto “From the Protection of Culture to the Protection of Civilians”. It included a variety of speakers, displaying CIMIC and the CCOE´s work out of different perspectives and backgrounds. Moreover, the annual “CIMIC Award of Excellence” was dedicated to the

President of the Republic of Croatia, H.E. Kolinda Grabar-Kitarović for her outstanding commitment in the issue of gender equality and the empowerment and women and girls and to Josef Reiterer from UNOCHR in Wien/ Austria.

For more information and background on CIMIC and the CCOE´s work, please see our online book publication “CIMIC – In Missions and Operations: Reflections on History, Current Affairs and Perspectives”, released in recognition of the 10th anniversary.

Although the CCOE is accredited as a NATO Centre of Excellence, its capacity and experience are also available to other international organisations like the European Union, Non-Governmental Organizations and scientific institutions.

The centre is financed and controlled by the Sponsoring Nations and is not part of the NATO command structure. It is the objective of the CCOE to have as many Sponsoring Nations participating as possible, because this will enlarge the knowledge and experience level of the CCOE, and will strengthen the position of the CCOE as a body for creating the (future) doctrine of Civil-Military Interaction.

On 25 July 2019, Italy announced its interest to join the CCOE, after which The Netherlands (as Host Nation) started the process of developing the Notes of Joining (NOJ) to the Operations and Functional MOUs. After the NOJ to the OPS MOU was signed by all parties involved on 1 December 2020, Italy became formally a Sponsoring Nation of the CCOE. Italy will fill a post in the Training and Education Branch. The incumbent officer is expected to arrive in the first half of 2021. 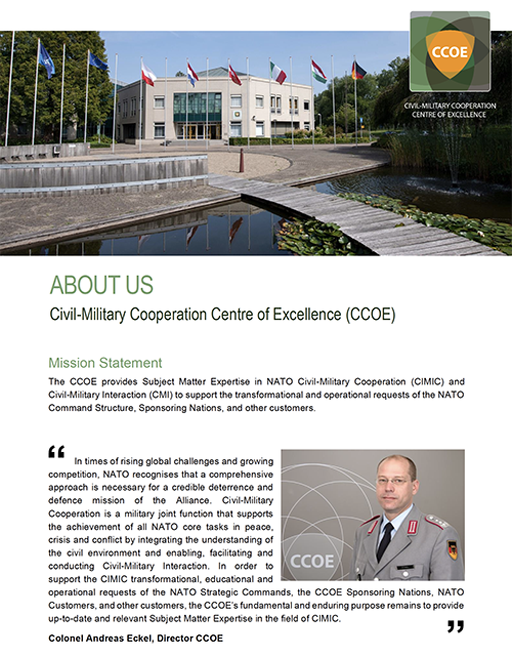