The CIMIC Award of Excellence was positioned during CIMIC Centre of Excellence´s 10th Anniversary Event in 2017 in The Hague as the marque symbol of this institution towards the wide array of stakeholders in civil-military interaction and the CIMIC Community of Interest worldwide.

The intent is that the Award should be given annually to one individual and one institutional Awardee for their outstanding contributions and engagement in the much larger field of civil-military interaction. With this, individual and institutional efforts can be honoured, which contribute to the better interaction between both sides and raise the significance of civil-military interaction and CIMIC.

Congratulations to the CIMIC Award of Excellence 2022 Winner!

The Director of the CCOE, Colonel Andreas Eckel, presented the 5th individual CIMIC Award in the presence of the Mayor of The Hague, Jan van Zanen to Professor Dr Klaus Beckmann for his commitment in originating and implementing the study programme Master of Arts Civil-Military Interaction (MCMI). This study programme aims to prepare future military executive personnel to perform command functions and executives of Governmental, Non-Governmental and Independent Organizations for careers across the spectrum of Civil-Military Interaction. Read more 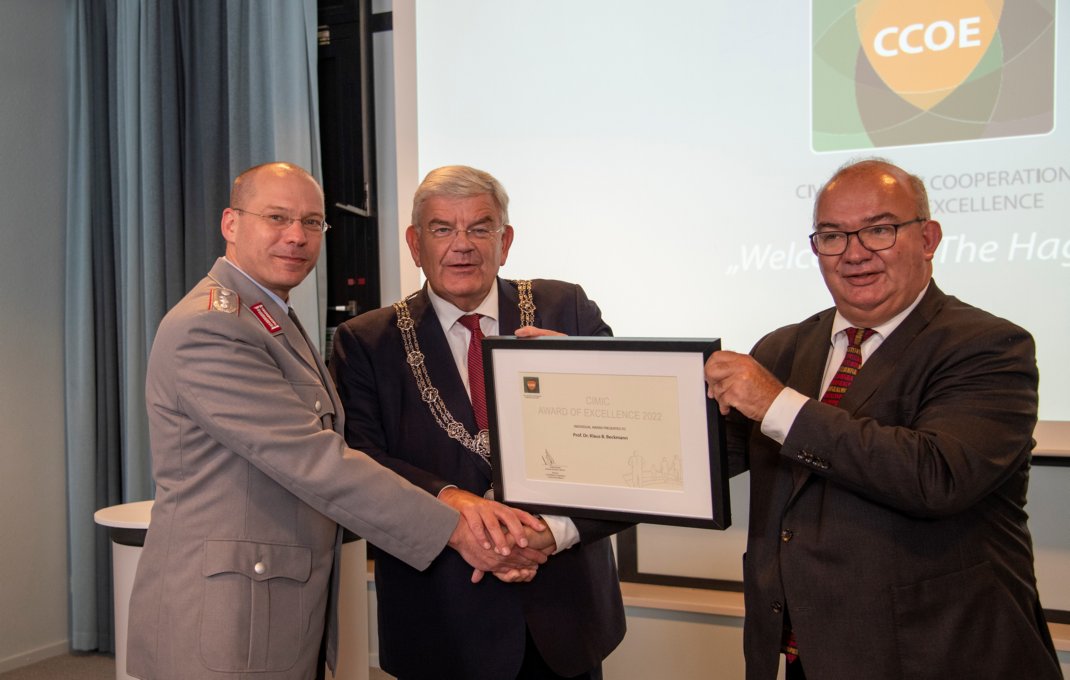 The 2022 institutional CIMIC Award of Excellence is presented to the town of Motta di Livenza, Italy. Our Director, Colonel Andreas Eckel, and the Commander of the Multinational CIMIC Group (MNCG) in Motta di Livenza, Colonel Ugo Proietto, presented the mayor Mr Alessandro Righi with this award. During a ceremony in the town hall, the mayor accepted the award on behalf of the local community with enthusiasm.

The garrison town of Motta di Livenza has been host to Italian Army and NATO partner units for more than 120 years. Today, the Multinational CIMIC Group maintains warm relationships with the city and people of Motta di Livenza. On special events with high public recognition value, the cooperation between the Italian Army and the town, as well as city-sponsored actors from public and cultural life, has been exemplary. The MNCG has cooperated with the city of Motta di Livenza extensively during the last years, promoting several initiatives, including a non-competitive race to foster solidarity (since 2019), a WWI exhibition (2020) and a collaboration agreement to promote cultural growth (2021). The town has supported training and educational events by providing infrastructure and high-level role players. 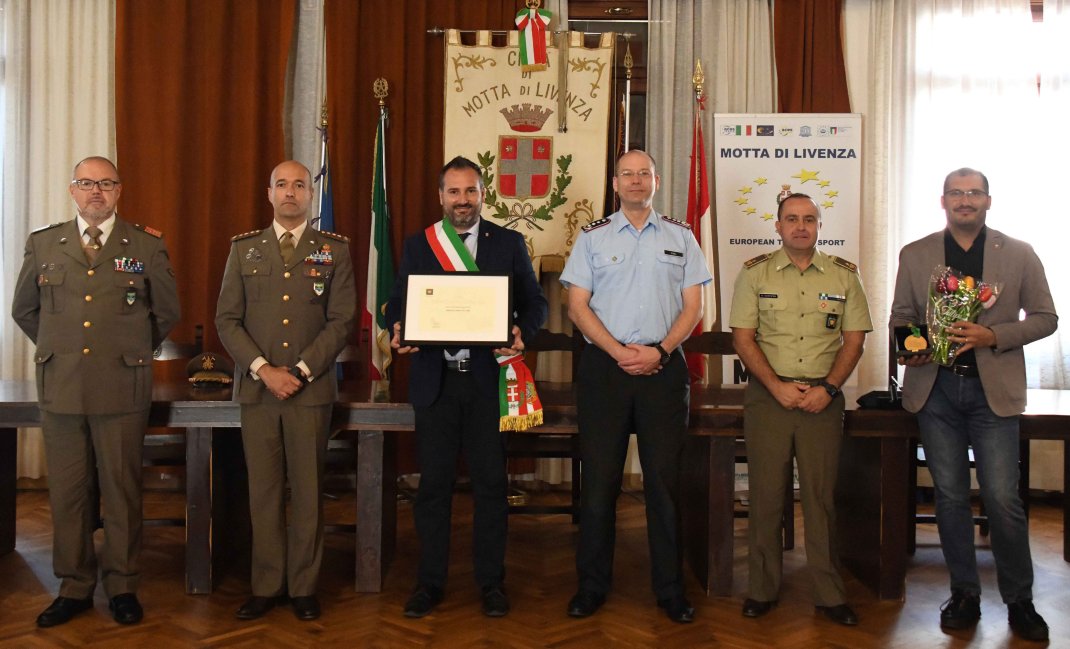 Congratulations to the CIMIC Award of Excellence 2021 Winners!

We are pleased to announce that the Fraunhofer Institute for Communication, Information Processing and Ergonomics (FKIE) and Colonel (ret.) Christopher Holshek have been named the winners of the 2021 CIMIC Awards of Excellence!

The CIMIC Award of Excellence is an annual award that celebrates the contributions and innovations of institutions and individuals in the CIMIC community and amplifies the influential role that CIMIC plays in modern environments. The winners are a great example of Civil-Military Cooperation.

Our Director, Colonel Frank van Boxmeer, and the Commander of the Multinational CIMIC Command in Nienburg, Colonel Andreas Timm, presented the institutional award to the FKIE.
Professor Dr Martini accepted the award on behalf of the Institute for outstanding cooperation.
The cooperation between the Multinational CIMIC Command, the FKIE and the joint development of the CIMIC Information Management Database is an example of civil-military cooperation.
The award is presented annually to an individual and an institution for their outstanding contributions and commitment in the field of CIMIC & CMI. It will be used to recognise individual and institutional efforts that contribute to better interaction between the two sides and increase the importance of CIMIC & CMI by paying attention to it and promoting civil-military interaction and cooperation. 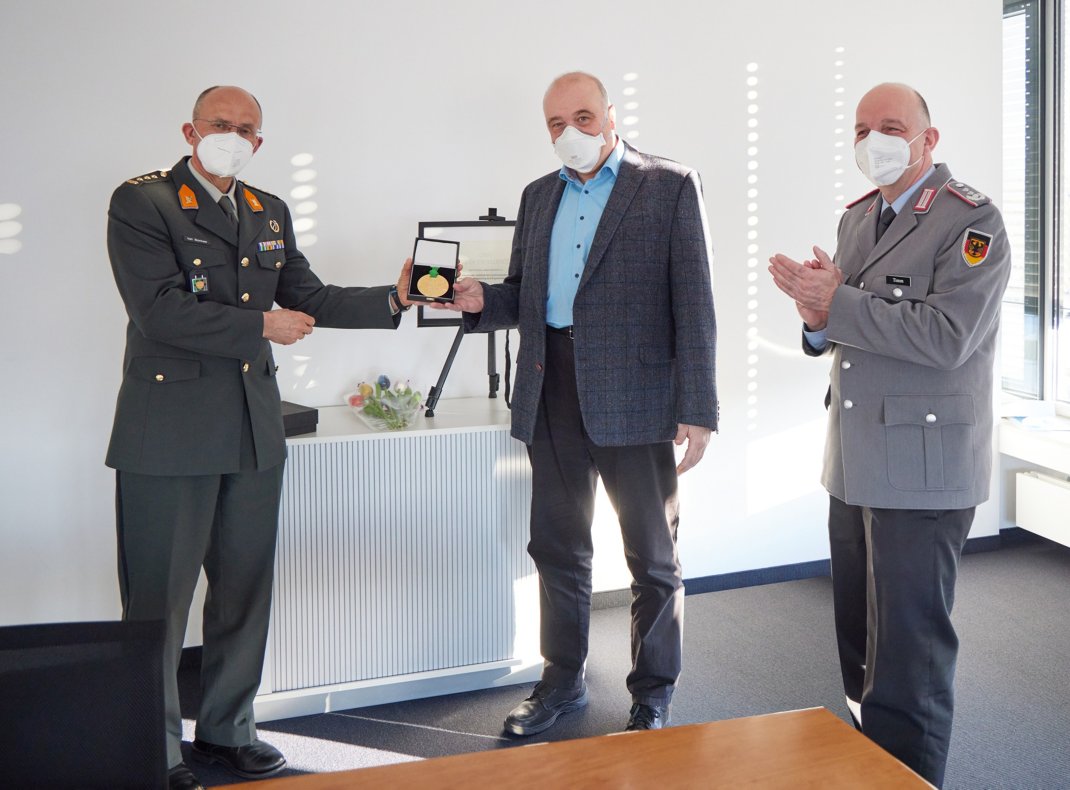 During today's Civil Affairs Roundtable, Vice President of the Civil Affairs Association, Colonel Holshek, is honoured for his great work by the Director of the CCOE, Colonel Frank van Boxmeer:
"Colonel Holshek is a dedicated retired US Army Civil Affairs Officer with over three decades of civil-military conflict management experience at multiple levels and settings. He supported the establishment of a solid framework for NATO CIMIC and US Civil Affairs entities to explore possibilities of cooperation in the fields of academic work, doctrine, concepts, and training and education. Colonel Holshek was specially nominated for his enduring commitment between US CA and the CCOE. The CIMIC synchronisation project focuses on NATO CIMIC and US CA familiarisation to identify the similarities within the capabilities and exploit the existing professional crosswalks to enhance interoperability, which will lead to greater mission effectiveness." 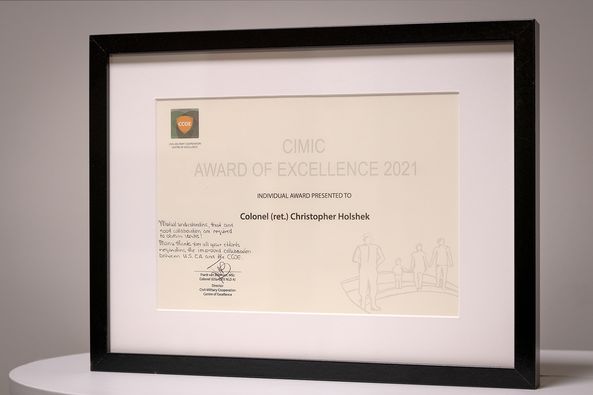 Congratulations to the CIMIC Award of Excellence 2019 Winners!

We are pleased to announce that the OTH Regensburg and Mr Srečko Zajc have been named the winners of the 2019 CIMIC Awards of Excellence!

The CIMIC Award of Excellence is an annual award that celebrates the contributions and innovations of institutions and individuals in the CIMIC community and amplifies the influential role that CIMIC plays in modern environments. The winners are a great example of Civil-Military Cooperation. 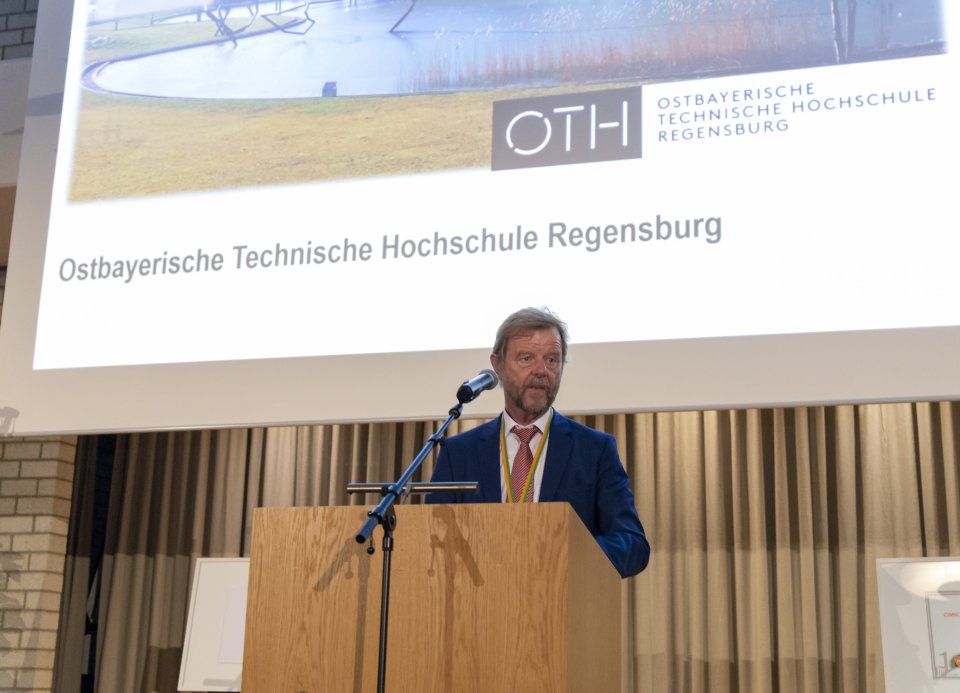 The OTH Regensburg engages for years already in the Joint Cooperation Excercise in Nienburg. The most important CIMIC exercise to date. With their constant participation, they represent a great value to the whole community.

Please join me in congratulating Mr Srečko Zajc. His dedication to the CIMIC community to provide cooperation between the military and civilians everywhere while engaging with stakeholders daily is genuinely inspiring. 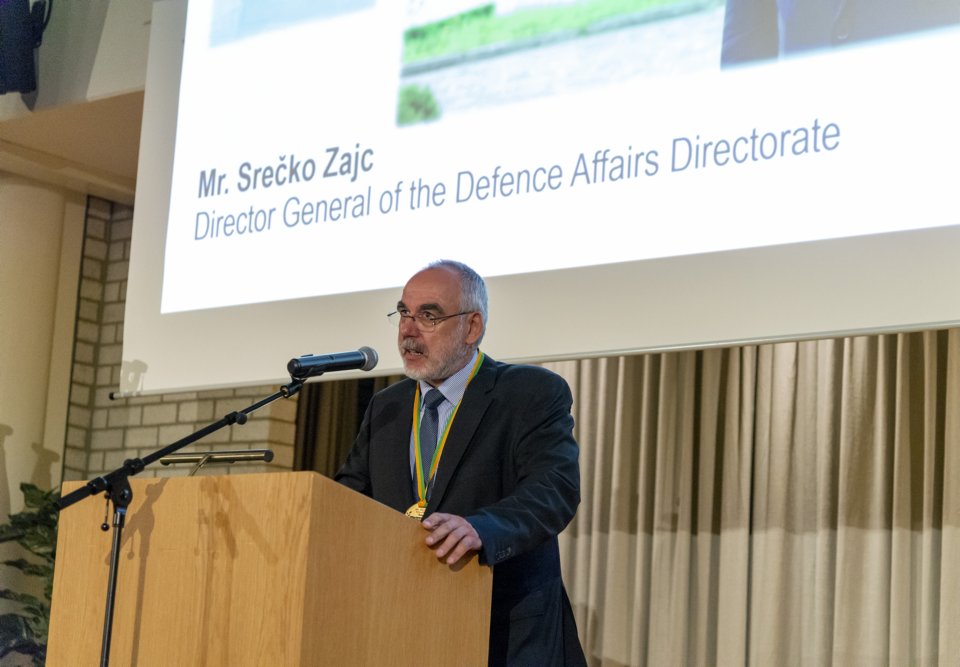 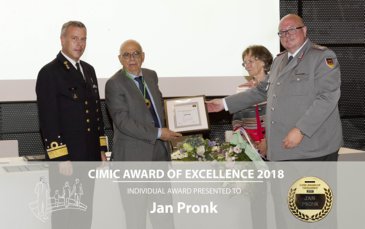 Jan Pronk is an individual who has been a driving force in bringing together the civilian and the military world.
He is a person with extensive knowledge of civilian and military organisations, a broad network and a deeply felt motivation to create a more peaceful world and his experience in civilian-military cooperation date back to the mid-seventies. As Minister for Development, he saw in a mission in the Sahel that Defence and Development worked closely together for the first time. From then on, he has continued to spread the message that the fight against injustice cannot be fought alone and that civilian and military organisations can indeed be much more effective if they combine their efforts. Jan Pronk has done this in his work as a politician – and especially in his work for the UN. And over the last seven years, he helped the Common Effort Community in its goal to create a safer and more secure world. When asked what his most important lesson was in working together with the military.

He responded that civilians and politicians often talk, discuss and postpone. But that the military has a teamwork-approach, a strong structure and no time to waste.

Institutional Award 2018 for City of Nienburg 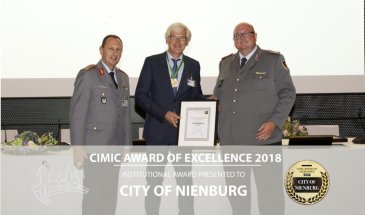 The garrison town of Nienburg has been host to German Bundeswehr and allied military units for more than 70 years. Today, both the EW Bn 912 and the CIMIC Competence Centre (DEU CIMIC CC) maintain warm relationships with the City and people of Nienburg.

On special events with high public recognition value, the cooperation between the Bundeswehr and the city as well as city-sponsored actors from public and cultural life has been exemplary. Especially the DEU CIMIC CC has cooperated with the City of Nienburg extensively during the last years. The city has supported training and educational events with providing infrastructure, high-level role players and coordinated traffic and parking management closely with military units. 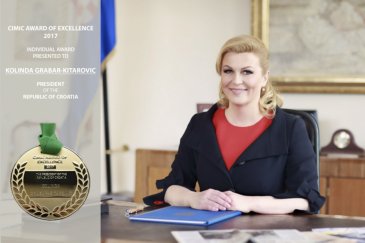 Kolinda Grabar-Kitarovic is a president who has enhanced our understanding of conflicts throughout her career.
We have come to know her as a staunch advocate for the interests of civilians in conflicts – most notably that of women and girls. As an Assistant Secretary-General at NATO and ambassador, she has always been committed to a strong trans-Atlantic alliance. But rather than defining her work as gender advocacy, I propose that we see her as someone who contributes to the update of the thinking we need to solve today and tomorrow’s problems. Without understanding the full impact of conflicts or military action on all civilians – both men and women – it is virtually impossible to develop long-term stability. And by empowering women and girls anywhere, we create more advocates and drivers for stability. The CCOE recognises the important work that the Croatian President Kolinda Grabar-Kitavoric has done in this field. 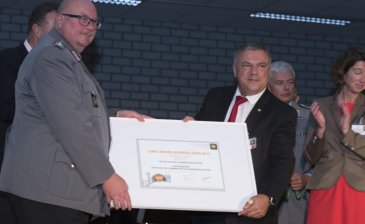 UN OCHA’s mandate in humanitarian civil-military coordination demonstrates how a small team of talented professionals can have a major impact on the effectiveness and efficiency of militaries supporting humanitarian action.

Since 1995, OCHA’s Civil-Military Coordination Section (CMCS) has become a critical actor across all of OCHA’s core functions to support collective preparedness measures and to provide a point of access for governments, regional organisations, military and civil defence institutions interested in planning and, when requested, providing support to humanitarian agencies.