Today two US Cadets are celebrating their flag day – the Independence Day 4thof July – in The Hague/ The Netherlands. 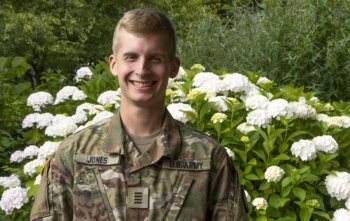 Cadet Sam Jones is a First Class Cadet at the United States Military Academy at West Point, New York / United States of America. Originally he is from Atlanta, Georgia in the southern United States. Sam grew up very close to where Coca-Cola was invented and not far from the home of the US Army’s Infantry and Armor Training Centre. At West Point Academy he studies Environmental Science and is a member of the Orienteering Team. Jones will earn his commission as a Second Lieutenant in May 2019.

At the CCOE he is an intern in the Concepts, Inter-Operability, and Capability (CIC) Branch for three weeks. He is assisting the CIC staff in writing and editing an updated edition of CCOE´s CIMIC Handbook. Following him there are many similarities between the doctrine that CCOE produces and the training that West Point cadets receive as part of their education.

Jones applied for this internship in order to learn more about NATO CIMIC, as well as to interact with allied soldiers from around the world. He expects that this internship will help him to develop his own interest in working in the US Army’s Civil Affairs branch later in his career.

In addition to working at the CCOE, he will be travelling around The Netherlands and the surrounding countries in his free time. This is an excellent opportunity to experience part of European culture and visit places unlike anywhere in America.

Cadet Connor Phillips is a rising senior at the United States Military Academy at West Point. As a sociology major and contributor to the Army Debate Team, he has a fervor for learning, especially about issues affecting societal cohesion.

As an intern, he works in the Lessons Learned and Analysis Branch, helping to edit and compose instructional material, and exploring the option of becoming a United States Civil Affairs officer.

Phillips was born in Los Angeles, California on the Pacific coast of the United States, and enjoys traveling, eating, combat sports, and talking about California to non-California natives.

He currently serves as the personnel officer of his Cadet Company, and will commission as a second lieutenant in the United States Army in May 2019.

We wish both of them a pleasant and exiting time at the CCOE with much input about CIMIC/ CMI related topics.