Under the lead of the Course Director the course staff consisted of a Senior Instructor supported by external syndicate coaches and Subject Matter Experts (SME’s). This course the coaches were coming from Poland, Germany, Italy and the Netherlands under supervision of SME’s from Belgium and the Netherlands. One week prior to the start of the courses they’ve been present in The Hague to finalize all preparations for the courses and to get them familiarized to the program and curriculum. The lectures and role play were provided by external guest speakers, instructors from the CCOE’s Training and Education Branch, representatives from UNOCHA/CMCOORD, IOM and ICRC and the course staff itself. 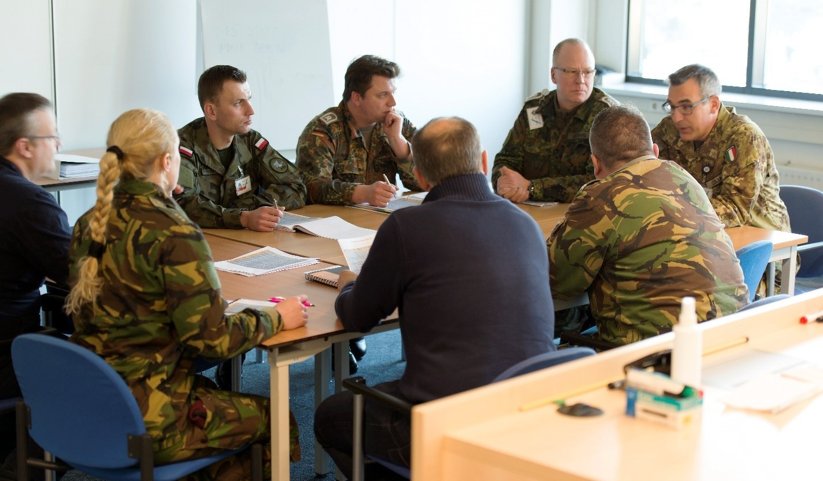 “It was my first time as a Course Director and I have experienced this role as very interesting and instructive. The course was a success due to the support of this great team of professional and enthusiastic coaches and SME’s and the positive engagement of the participants!!” (Course Director Captain Vera Bekker)
Picture: Instructor meeting / Source: CCOE/Dube

NATO accredited NCFWC and NCSWC are designed to train CIMIC Field and Staff Workers in parallel, enabling the 30 participants that came together in The Hague to conduct CIMIC activities across the full spectrum of military engagement in a modern operational environment. During the first week of the course the participants are receiving several lectures and conducting case studies within their syndicates. The second week of the course will focus on the practical application of CIMIC activities when the participants will be deployed to the fictive country TYTAN as a tactical CIMIC unit (Field Workers) or members of the G9/CIMIC branch of the Land Component Command (Staff Workers).

On Friday 26 February 2016 the courses were completed by handing over 30 well-deserved certificates, having the participants provided with CIMIC tools they can use in their current and future assignments and missions.

This article is written by CCOE / Training & Education / Captain Vera Bekker (NLD A).