“Sometimes, the soldiers are more civilian than us!”

The second NATO CIMIC Field and Staff Worker Courses of 2017 ended last week. For two weeks during the Dutch summer, military and civilian students from nine different nations, together with experienced instructors, gathered at the CCOE. It had been the aim of the two parallel courses to enable the students and future actors in the field to conduct CIMIC activities across the spectrum of military engagement, as well as to create awareness for those organizations and individuals interested in CIMIC. These aims have been met, according to two attendees, who sat down for an interview with the Public Affairs Office: Captain Remigijus Zilinskas from the Lithuanian Armed Forces and Mario Di Gennaro from the German Red Cross.

The major questions we asked: How do students actually benefit from a course at the CCOE? And in more practical terms: which were their starting expectations and their final impressions?

For Captain (OF-2) Remigijus Zilinskas, who has been in the military for more than 20 years and who was recently appointed as CIMIC Operations Officer to the CIMIC Department of the Joint Headquarter of the Lithuanian Armed Forces (J9), it was the first time to attend a CIMIC course. Thus, the Captain sees a need for: “The basics and specific knowledge to plan CIMIC operations, in view of my possible deployment abroad next year, as well as for my current assignment in Lithuania.”

Following the NATO Warsaw Summit 2016 with its decisions to enhance the allied force presence in the North-Eastern regions of Europe, as well as the ensuing deployment of a multi-national battalion to Lithuania, his country is currently engaged in developing its CIMIC capabilities. This extents to international missions, as well as tor defense planning and crisis management purposes.

According to Mr. Zilinskas, who is “proud that Lithuania is the most advanced Baltic State in CIMIC”, this new presence automatically calls for a reinforcement of the role of domestic CIMIC. The enhanced military presence in Lithuania calls for a revised role for CIMIC in collective defense, described by the Captain as the cooperation and interaction between NATO entities, national militaries, local civilian authorities, NGO’s/GO’s and civil society in order to increase civil preparedness, strategic communication, and resilience in any of crisis scenario.

A much longer experience in CIMIC has been gained by Mario Di Gennaro. Despite his 25 year career in the German Red Cross, Di Gennaro still sees the opportunity to attend a CIMIC course as “a personal learning opportunity on how CIMIC is supposed to work in the field, to be also shared with colleagues at home”.

Even though it was not his first time sitting in a class-room with members of the military, he still notices interesting aspects of such an experience. “What I see both in classrooms and on field” said Di Gennaro,  “is that sometimes soldiers are more civilian” than us; for example, there is a lot of discussion on how to do things, which actually makes me feel at home, as it is a problem that civilians often have before taking action.” Similarly, according to Di Gennaro, militaries and civilians active in the field of CIMIC share the challenge to teach and disseminate their mandates, principles, and responsibilities much more. 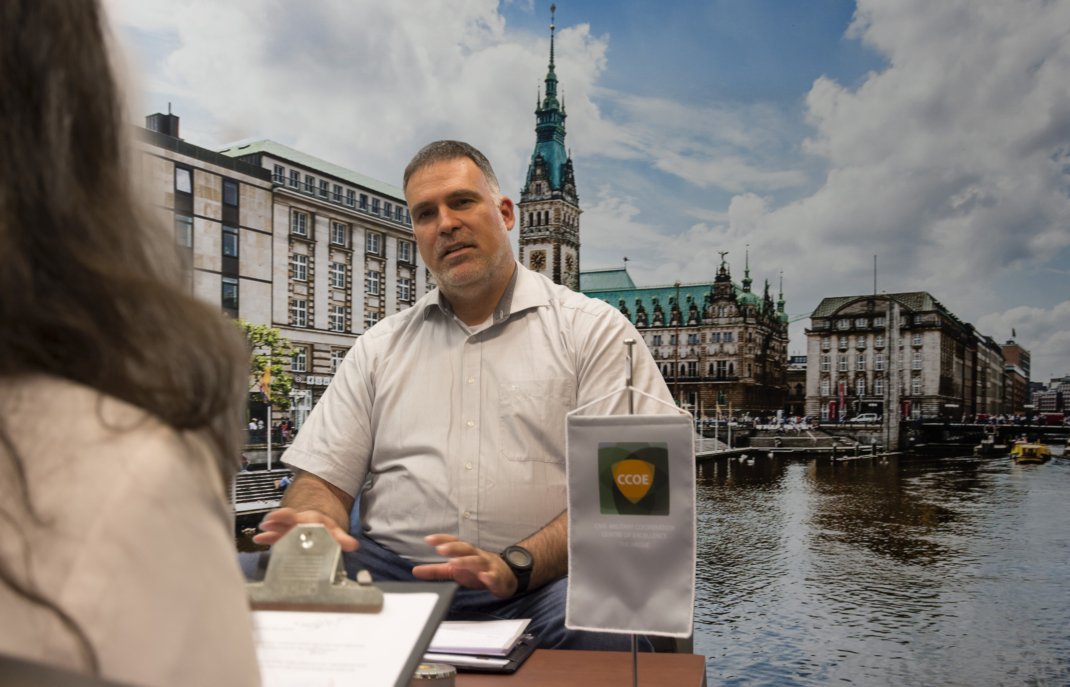 For both the attendees, a soldier at the beginning of his commitment in CIMIC and a civilian with a long-time background experience, the courses held at the CCOE brought added value. For the Lithuanian Captain, it was a unique opportunity to become more confident in interacting with civilian actors and to network in The Hague. Furthermore, Mario Di Gennaro appreciated the lecture in Dialogue and Discussion very much, as well as the military metrics and structure used for situation analysis. Last but not least, he said due to the great hospitality: “At the CCOE, I already feel treated as a colleague.”