As NATO´s key player within the civil-military environment the CCOE had a visit by a European Union (EU) delegation to discuss the further roadmap to define the role of EU Disciplinary Leader for CIMIC.

The coordination of future cooperation possibilities, requirements for training of CMI/CIMIC personnel within the EU, collaboration with the European Security and Defence College (ESDC) and overall procedures to become the Disciplinary Leader were the main topics of this fruitful meeting.

Lieutenant Colonel Sterian Bumbaru – Member of the European Union Military Staff – gave an overview of the EU Common Security and Defence Policy (CSDP) Military training landscape, with a particular focus on the role and the responsibilities of the EU Military Training Discipline Leader. He stated that an EU military training discipline is a functional training category that groups distinct training thematics in support of a military capability for CSDP military missions and operations. 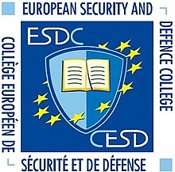 Following him, a Discipline Leader is a:

From the European Security and Defence College (ESDC) Alin Bodescu participated as one of the Training Managers of the College. He explained CCOE´s possibilities for contributing to the EU Integrated Approach and the objectives of the ESDC. 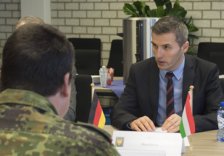 For him providing CSDP Missions’ and Operations’ personnel with a common understanding of  functioning principles and a sense of common European identity is one of the mayor tasks of his organization. This for example has to be done by providing tailor made trainings responding to the training needs of CSDP Missions and Operations. Exactly here he saw possibilities for the CCOE to contribute within their Discipline Leadership.

As an additional effect he claimed the positive side effects of those common trainings:

For the CCOE the Discipline leadership offers many opportunities and synergies for closer cooperation’s to the ESDC 136 network members, five Associated Network Partners (ANP), round about 95 activities in the academic year and up to 18.000 alumni of the college; so it´s a clear win-win situation for all participants. 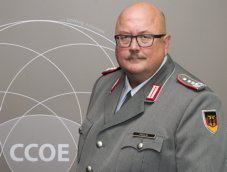 Colonel Wolfgang Paulik – Director of the CCOE – stated after the meeting, that this big project is just more than just a tick in the box:

“Now we have to operationalize our will to participate by acting as the Discipline Leader of CIMIC within the EU. Now we have a better understanding about, what the EU expects from us in this huge networking hub and what we have to integrate into our Program of Work. Now it is time to create reality!”

And this reality starts – as usual – with a fact finding phase, the coordinating paperwork, follow-up meetings to analyze and harmonize procedures and will end in common trainings, led by the CCOE, for NATO and the European Union.