Centers of Excellence relevance for NATO

Centers of Excellence (COEs) have a high collective potential for NATO’s evolution. Although being outside of the NATO Command Structure, COEs are closely linked to NATO’s Allied Command Transformation and play a vital role for NATO’s Transformation. On Wednesday 09 December 2015 CCOE Director Colonel Roel Been met General Denis Mercier, the Supreme Allied Commander Transformation (SACT), in Norfolk, USA. Colonel Been acts currently as the spokesperson for all COE’s.

During the appointment General Mercier pointed out his focus on six areas: command and control, logistics and sustainment, collective training, partnership, manpower and capabilities. He stated:

“All the Centers of Excellence can provide tangible actions in expanding those six focus areas in support of NATO’s Transformation. I also believe that Centers of Excellence, working in a federated manner, can be key contributors to increase NATO’s operational agility, strategic awareness, security networking, shared resilience and strategic communications, which are five strategic military perspectives addressed in Framework for Future Alliance Operation.”

Furthermore he underlined the high importance, and therefore one of his priorities, to improve the benefit of COE’s as well as to better engage them. In order to achieve this, ACT has to elaborate on how and on which level to better link COE’s. Finally General Mercier was very interested to attend the next COEs Directors Conference to convey his thoughts directly to the Directors. Colonel Been informed all COE representatives on the good news during a COE side talk.

He also was given the opportunity to adress the whole Chief of Transformation Community on 10 December 2015. There Colonel Been explained what COEs do, for whom they work and offered to support with the COEs collectively on the strategic ACT Transformation topics what was well received by the NATO Chiefs of Transformation. 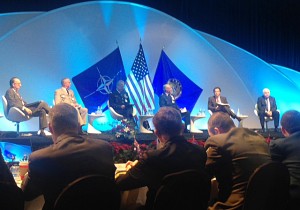 ACT leads many initiatives designed to transform NATO’s military structure, forces, capabilities and doctrine. Its main responsibilities include education, training and exercises, as well as conducting experiments to assess new concepts, and promoting interoperability throughout the Alliance.