Marking the 10th Anniversary of its full accreditation by NATO, the CIMIC Centre of Excellence celebrated its first decade of operations and bestowed the 2017 CIMIC Award of Excellence on October 10th at its headquarters in The Hague.

H.E. the President of the Republic of Croatia, Kolinda Grabar-Kitarovic and the Civil-Military Coordination Section (CMCS) of UN OCHA, represented by its chief Mr. Josef Reiterer, received  medals and certificates in front of a packed audience consisting of military leaders and civilian stakeholders from the governmental, political, diplomatic, academic, IO, GO, NGO and business domains.

A wide array of speakers and public representatives with key notes and welcome addresses participated the ceremony and recognized the accomplishments of both honourees in various field of Civil-Military Interaction. 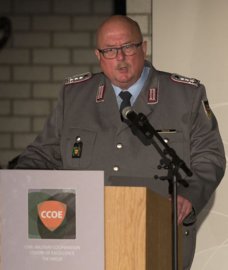 “In a world, where any tactical military activity, or counter-activity, is likely to have a fast ripple effect onto both the operational and strategic levels, the role of CIMIC also needs to be empowered to stand the test on these levels. In consequence … CIMIC might need to adjust its role from a supporting military function to one which is heavily supported by the other, more traditional military functions.”

He continued by challenging his house to further its efforts to enhance the role of CIMIC:

“It will be most important for us as a think tank to make our counterparts, both in the military as in the non-military environment, much more aware about the relevance of CIMIC in countering these new challenges. And our professional advice to this end must be rendered on the tactical, operational and strategic levels.”

The Hague, International City of Peace and Justice

In response to his opening, the Deputy Mayor of the City of The Hague, Mrs. Saskia Bruines, encouraged the CCOE to develop its interface with other civic humanitarian and development entities, located in the city: “The Hague is pleased that the NATO Civil-Military Centre is based here. The presence of many other international bodies here in The Hague, made it attractive to you. And that is precisely what The Hague is aiming for in good and close cooperation with the Ministry of Foreign Affairs. I hereby challenge the NATO Civil-Military Centre of Excellence and the United Nations Office for the Coordination of Humanitarian Affairs to discuss the possibility of data exchange in the area of cultural heritage.”

Deputy Mayor of the City of The Hague, Mrs Saskia Bruines

Introducing the honourees, H.E. Mrs. Hester Somsen, Director of Security Policy at the Dutch Ministry of Foreign Affairs, underlined the joined civilian and military efforts to protect civilians and societies in times of crisis and conflict:

“By working together, we become more effective in reaching our common goals. … That shared purpose has brought us here today and I believe that is worth celebrating. Because everyone agrees: the protection of civilians has never been as important as it is in 2017. … The boundaries between the realms of the politics, military, society and economy have always been thin. Yet due to globalization and technological advancement, those borders now only exist in the mind.”

As for the specific role of the CCOE and CIMIC in facing this challenge, Mrs. Somsen continued “… this ceremony also serves to mark an important fact: this centre of excellence has been at the forefront of the development of our thinking for the past decade. With its courses, training and contributions to doctrine development, the CCOE’s work has informed and helped shape our response to current – and future – security challenges…. CIMIC allows to access information that is crucial to counter threats in the field…. . Access to information is crucial and so often, good relations with a local population help produce that information… Once again: the protection of civilians should be at the centre of any military action…. And – this will not be a surprise – we should continue to invest in our CIMIC capabilities.”

The CIMIC Award of Excellence 2017

Speaking on behalf of President Grabar-Kitarovic, who was unable to attend the ceremony due to urgent matters of state, Croatian Ambassador Andrea Gustovic-Ercegovac accepted the 2017 CIMIC Award of Excellence and stated:

“In the eight years since joining NATO, and four years since joining the European Union, Croatia and its people have made great strides to significantly contribute to the political and humanitarian mandates and goals of both organizations. Together with our President, we also consider this award as a recognition of our efforts. President Grabar – Kitarović would like to express her sincere appreciation and gratitude to the NATO CIMIC Centre of Excellence and its directors for nominating her for this award. She would like to point out that she is  particularly honoured to receive this award since she is very well aware of the valuable contribution made by CIMIC personnel to NATO missions and operations.” 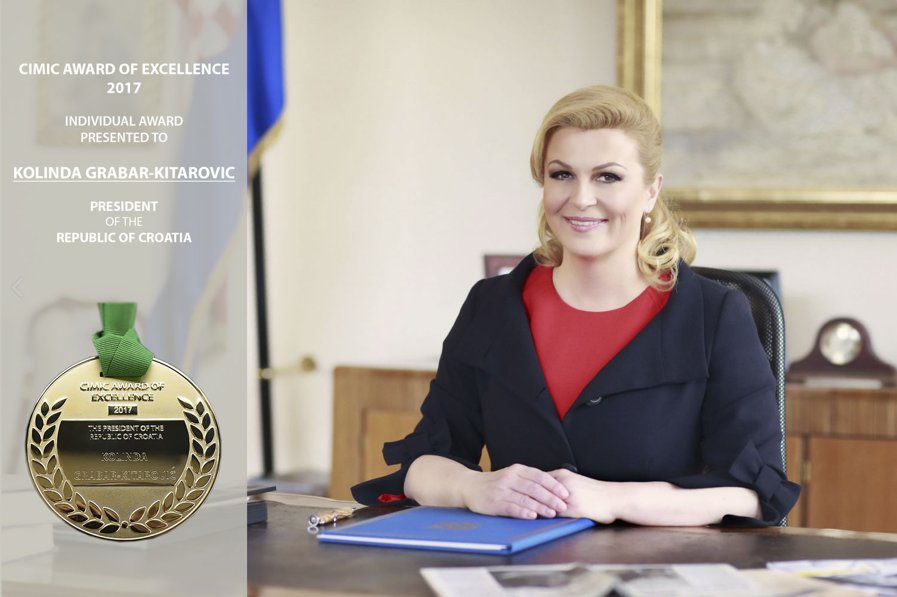 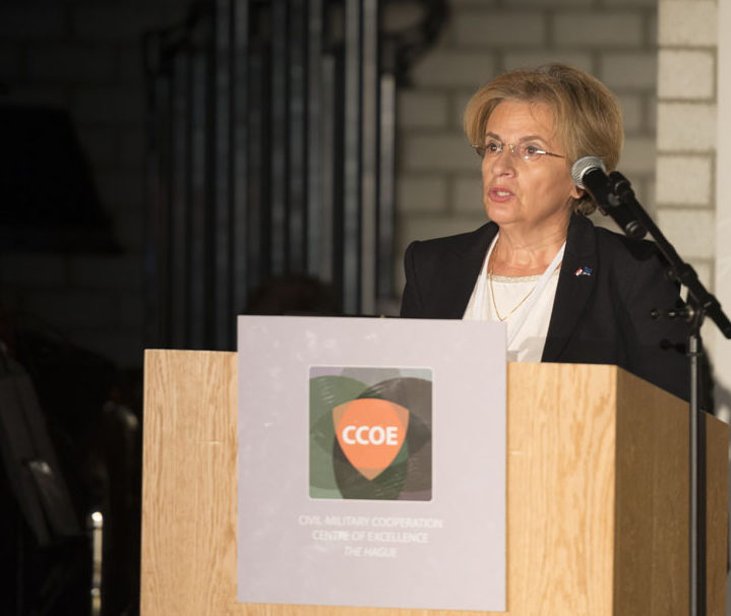 Accepting the CIMIC Award of Excellence on behalf of UN OCHA’s Civil-Military Coordination Section, Josef Reiterer described this honour as a milestone in the 21 years history if CMCS activities.

“We share the same values, we both care about people in need. And we want to establish Civil-Military cooperation on all levels to assist those people who need it. We also accept the challenge by the Deputy Mayor of The Hague to establish a closer cooperation with the CCOE in connection with the UN Data Centre here in The Hague.” 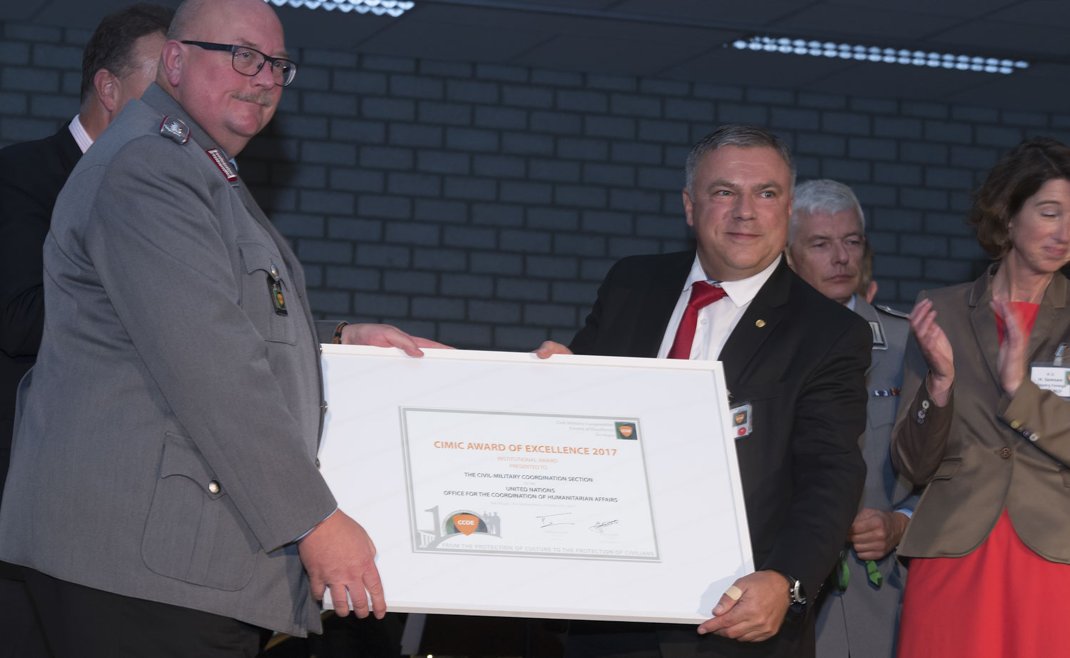 In addressing the motto of the 10th Anniversary Celebration “From the Protection of Culture to the Protection of Civilians”, Karl von Habsburg-Lothringen, the President of Blue Shield International, outlined the respective mandate of the cultural property protection organization:

“Our focus today is on the The Hague Convention: so basically we have to deal the conflicts of our time. We will not disregard natural or human-made disasters, since a lot of work from the past is also linked to those cases. Yet, The Hague Convention is mainly about armed conflicts, and this is where our main responsibility will be. However, I think it is really important for the Blue Shield to already operate in the time ahead of a conflict, and during the conflict itself, as this is the time when the most damage occurs. In pre-conflict scenarios, it is crucial to support countries in the implementation of the requirements of The Hague Convention. There are many organizations very much involved in post-conflict scenarios, but on the contrary, only very few ones active in pre-conflict and during-conflict scenarios.”

As for the issue of the ‘Protection of Civilians, FRONTEX Humanitarian Rights Officer Inmaculada Arnaez elaborated on the approach of the ‘European Border and Coast Guard Agency’ during the migration crisis of 2015-2016 in the sea and land context. Therein, she described the key humanitarian rights challenges resulting from the need for shelter, food distribution, humanitarian assistance, the registration and referral to protection authorities, child protection, Gender considerations and other vulnerable groups in the interface of civil components with military operations.

Ten years of working as the NATO think tank and policy centre of CIMIC in are lying behind the staff members and subject matter experts of the sponsoring nations of the CCOE. This Anniversary and ceremony also honoured their common commitment to NATO to develop, train and share CIMIC knowledge and to connect the civilian with the military domains in facilitating stability and societal sustainability in conflict zones and crisis regions. 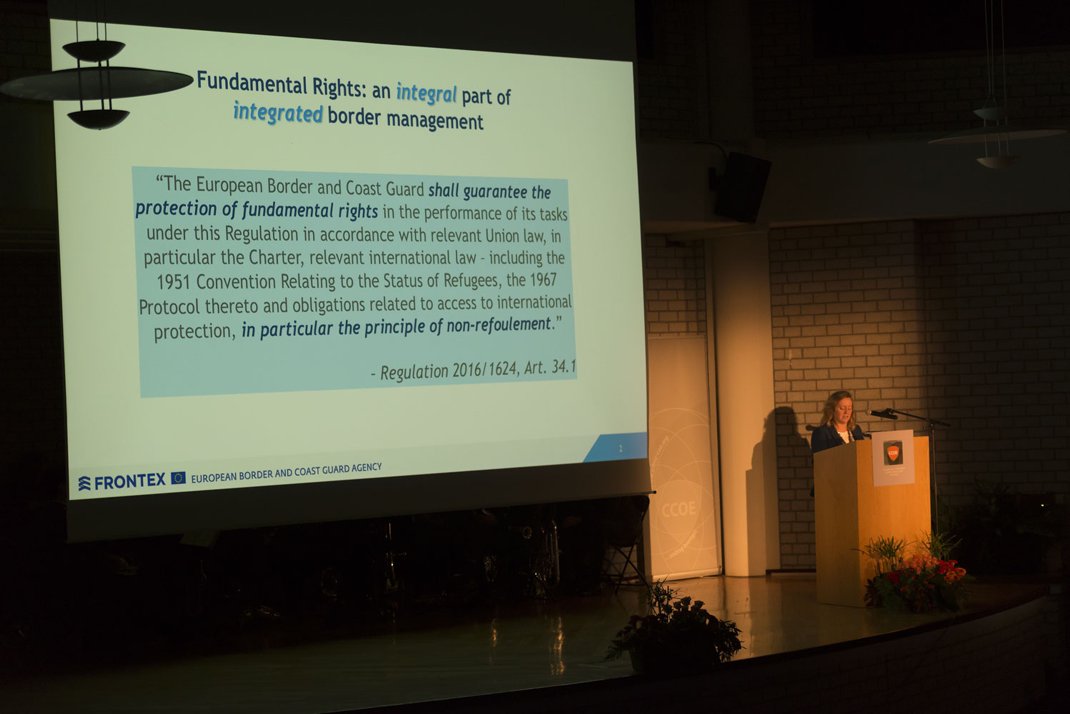