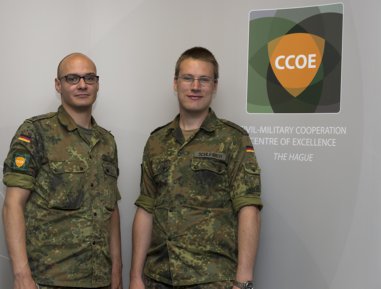 Going up against a Warcraft-3 World Champion, or completing a Masters’ with a 1.7 mark in Mathematical Engineering, seem to be now the core requirements to work at the Computer Information Systems (CIS) section at the CCOE.

Captain Tim Schleimer, an avid multi-purpose runner now heading CIS, entered the Federal Armed Forces in 2007. Following officer training, he held several positions as an Air Force IT officer throughout Germany. Herein, he is specifically proud of his contribution as an information manager for the HERKULES IT project at the “Federal Agency for Equipment, Information Technology and In-Service Support of the Bundeswehr” (BAAIN Bw) in Koblenz. He has also published on “Sustainable Food Production Algorithms.”

Lance Corporal Michael Rein, claiming that competitive e-Gaming is now an issue of his past, launched his Military career as a grunt in the Armored Infantry (411th Battalion) with expertise as a gunner on both the APCs Marder and Dingo. In 2005 at the GamesCon in Leipzig, he went up against the World Champion in “Warcraft 3” and in 2007, he belonged to the 5.000 best gamers at “World-of-Warcraft” globally. Following four years of college he re-entered the service to join the CCOE. In The Hague he finally discovered biking and enjoys hosting couch-surfers at his place near the beach in Scheveningen.