From the High Mountains to the Seashore

With seaside temperatures closing in on the high mountain climate at this time of the year, a four person delegation from the Mountain Warfare Centre of Excellence (MW COE) from Poljce, Slovenia, is currently visiting the CCOE. As a recent addition to the NATO COEs, just established in March 2015, it is still in the process to establish its internal operations and procedures.

To this end, the delegation from Slovenia will draw on the established expertise of the more veteran CCOE. This approach has kindly been described by the Branch Chief for Training and Education of the MW COE, Lieutenant-Colonel Drazen Komadina to “engage with one of the best developed brother COEs, from which we can learn a lot”.

When visiting the MW COE in late November 2016, as part of the CIMIC reach-out towards NATO’s South Eastern flank, Director Wolfgang Paulik offered the CCOE’s support in familiarizing the staff with the regular operations of a NATO Centre of Excellence. 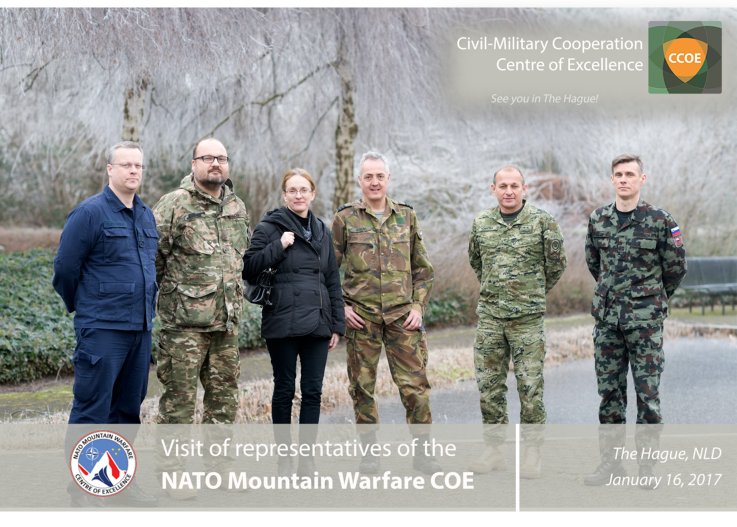 The delegation is being accommodated at The Hague by Lieutenant-Commander Primoz Protner, the senior national representative of the sponsoring nation Slovenia at the CCOE:

“I am particularly proud that my home country now also sports a NATO Centre of Excellence with particular expertise in the Mountains, which shape much of our nation. Both within the family of the COE’s, as well as across NATO, it is key to our mutual defensive capabilities to pool all knowledge available in a field of expertise for the use by all partner nations.”

The MW COE strives to become the hub for all aspects of mountain warfare expertise within NATO, from doctrine and standards, through concept development to best practice in training and education.

Drazen Komadina further elaborated: “Although a NATO specific doctrine on issues for of mountain warfare does not yet exist, operations around the world demonstrate that efforts and coordination in this field should be improved. As a result of force deployments, the mountain warfare community includes actually many more actors, than just countries in mountainous territory. It is one of our key midterm goals to author the respective NATO policies.”

With the strong ambition to build a community of interest around defensive issues in the mountain regions, the MW COE will reach out to all parties who are focusing on related fields of expertise, such as CIMIC, for example. Komadina, a former CIMIC officer himself, continued: “Mountainous areas do have smaller populations, which still need to be considered in military operations, as well usually a pristine ecological environment, both figuring into the essence of Civil-Military Cooperation”.

While in the Netherlands, the delegation from Slovenia expands its network in The Hague, appreciating Dutch cultural history in sunny winter days.