At the prestigious World Media Festival in Hamburg 2016, the

CCOE Introduction Video, won the Silver Award in the category “Web: Government-to-Citizen.” It has been produced in late 2015 by the Dutch film production company Corporate Trailer. The inaugural film of this institution, aimed at introducing a general audience to the scope of the CCOE, was deemed as one of the most relevant products of the last year. Over 1,100 entries from across the globe were screened for their excellence in communicating the key intended messages to the desired audience. 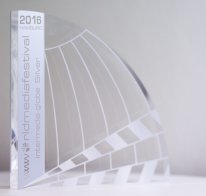 Handing the Silver Award to the CCOE, Jan Suiskens, Creative Director at Corporate Trailer said: “We are particularly proud to have produced this video together with the CCOE to bring the tasks of the institution to a broad audience. As the most decorated corporate film company in the Netherlands, we are very happy that our joined efforts have won this international recognition.”

The World Media Festival is a global competition dedicated to recognizing excellence in branded content from the areas of information, education and entertainment. The festival honors and celebrates excellent solutions in corporate film, television, web, web TV and print productions on an international scale. Award winner are among the leaders in their profession.