Lithuania: Welcome to my country!

In late 2016, a ranking delegation from the CCOE visited Lithuania and the other Baltic republics, to advance the Baltic NATO CIMIC Initiative.

This spring, it is the Lithuanian Army Joint HQ Head of CIMIC Department, who visits The Hague. While participating in the NATO CMI/CIMIC Higher Command Course at the CCOE, Lieutenant-Colonel Gediminas Latvys explained how domestic CIMIC affairs are gaining more and more relevance in his country. The reasons for this are quite obvious for him. 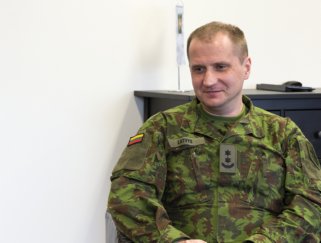 Gediminas Latvys identifies the current political environment as a time of high concern for the security of Lithuania, due to the 2014 occupation and annexation of the Crimea and the outside fed insurgency in the Eastern Ukraine. As a follow-up of the NATO Warsaw Summit, a multi-national combat strength battalion led by Germany has also been deployed to Lithuania to support this Baltic ally of the Atlantic Treaty, as part of the Enhanced Forward Presence.

This deployment increased the need for the three CIMIC platoons of the Lithuanian non-kinetic operations company, and their 100 CIMIC specialists, to cooperate with the NATO multi-national battalion, and even more strongly with the wide range of civilian stakeholders, such as governmental and non-governmental organizations, as well as local authorities. And with the CCOE as well: indeed, LTC Latvys came specifically to The Hague to enhance his understanding on the application of CIMIC at the operational level. In this new context, “Lithuania has to adjust its own defense accordingly, and this is why military and civilians must working even more closely together for the common aim: the protection of our nation.”

The newly deployed Alliance soldiers are being warmly received by Latvys, who is grateful to experience this high level of solidarity in support of the Eastern part of the Alliance territory.

He encourages the Allied forces to not just exercise with the Lithuanian forces, but to also use their time in the country to enjoy the rich forests, lakes and culture. What should absolutely not be missed during their stay in the country? “The old town of Vilnius, part of the UNESCO World Heritage, the Port of Klaipeda, the Curonian Spit and the thriving beach-life at the Baltic Sea shore during summer. They will be welcome everywhere”, he concludes.