Some weeks ago the CCOE bid farewell to Lars Cramer-Larsen. The Danish Lieutenant Colonel served for two years as Chief of the Lessons Learned & Development Branch (LL/Dev). It’s now time to say welcome to John Varmark Jakobsen, the new Danish officer, who has just replaced Lars Cramer-Larsen and to introduce him. 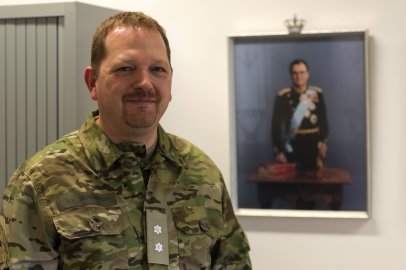 «My name is John Varmark Jakobsen, also called John or Jakob. I’m 49 years old and from Denmark, as Lars. I have lived almost my all life in Copenhagen. Eighteen years ago, I married a beautiful woman named Laila, and together we have an 18 years old daughter named Amalie.

We have found a great apartment in The Hague downtown and we are looking forward to explore the town, the beach and of course the country.

I am from the army (infantry) and my regiment is the Gardehusarregiment. Round 30 years ago I joined into the military and for the last 6 years I have been working at the Ministry of Defense in the Department for Emergency Planning and Home Guard in Copenhagen. I mostly worked with National Emergency Plans, Crisis Management Exercises in Denmark and in NATO, ensuring the execution of the Defense and Emergency policy of the minister of defense and involved in civilian-military programs in Afghanistan, Libya, Baltic countries. In 2016, I spent six months in Afghanistan, working in CJ35 – future Plans.

Before working for the Ministry of Defense, I was among others chief of the Home Guard on the island of Bornholm in the Baltic Sea, deputy head for the management secretariat in the Home Guard Command, teacher at the Danish Combat School. Back in the 90’s, I was working and cooperating with the Baltic countries, primary Lithuania and Estonia.

Beside my military education, I also have a Bachelor in Economics and another one in History, from Universities in Copenhagen.

In my spare time, I usually play golf, brew beer, travel around the world or explore historical sites. I’m part of the freemason organization in Denmark.

I’m really looking forward to work here at the CCOE, to stepp into the Civil-Military community, and hopefully making a difference.  A difference regarding CIMIC, which has been a big part of my military tasks since I started in the military, but also in the Lessons Learned area. Indeed, this is one of the most important area we have: from our experience, we can change the way we do things, so that we can do it better next time. This can be at work, but also in our private life. Albert Einstein used to say it in this way; “Learn from yesterday, live for today, hope for tomorrow”»