With the CCOE training experienced civilian and military experts in the due application of humanitarian standards in complex crisis situation, the Red Cross is taking similar approach with aspiring, future lawyers. For the tenth year already, the Netherlands Red Cross and Belgian Red Cross-Flanders invited international law students to its ‘Frits Kalshoven Competition on International Humanitarian Law’. One part of the week-long program has been staged again at the CCOE, exposing participating students to a variety of contest armed conflict scenarios.

The competition, aims to challenge ambitious law students on their knowledge of the rules that apply during armed conflict, international humanitarian law (IHL). 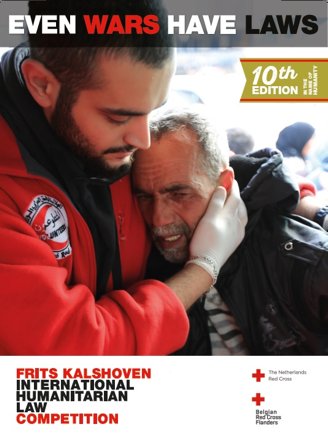 “We are pleased to announce that this year 27 students from 9 countries and 9 universities are participating. The theme of this year’s competition is ‘In the name of humanity’. The focus will be on realistic dilemmas related to contemporary issues of IHL”, says Dorien Jansen, the IHL coordinator at the Netherlands Red Cross.

Following an introduction into NATO CIMIC and the CCOE by Deputy Director Colonel Johan Wagner, on February 15th, participating students were exposed to a number of challenging role playing scenarios, testing their understanding and application of International Humanitarian Law. (Specific training scenarios at the CCOE will not be disclosed here, to maintain the drive for future competitors.)

“With the training part at the CCOE, the legal students are challenged to balance humanity and military necessity,” states Dorien Jansen. “Competitors are here being exposed to real life situations, demanding the proper application of the rules of IHL.”

After an intense week of workshops, lectures, role plays, and training court competitions, two final teams of students competed in the grand finale of the Moot Court in front of a bench of renowned experts at the Supreme Court of the Netherlands, The Hague.