Rich Summer Harvest for the CCOE

In a late summer windfall, the CCOE happily introduced several regular and temporary staffers to its ranks at an internal function on August 18th. The event also saw the promotion and recognition of five staff members. 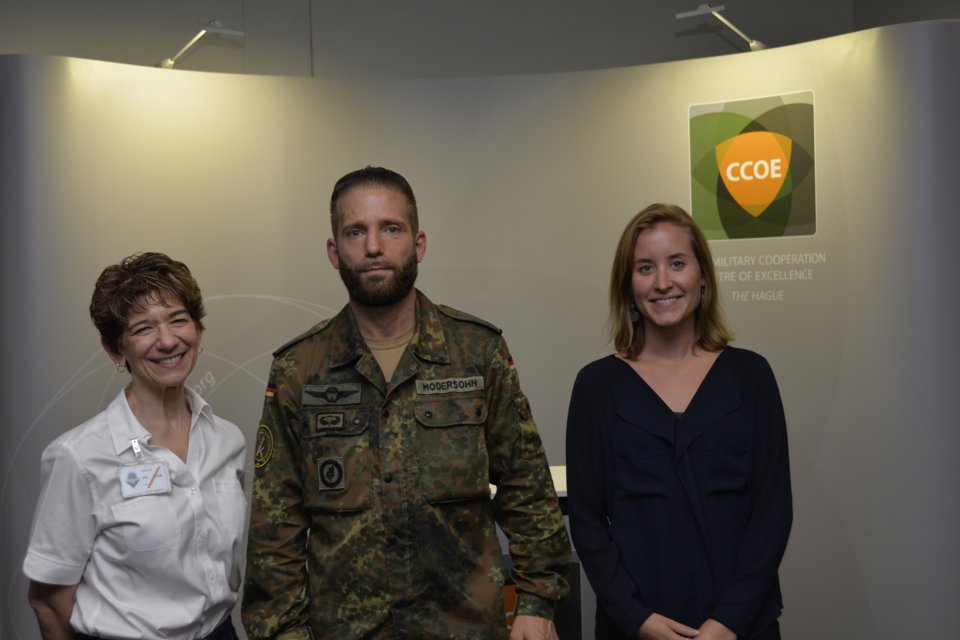 Mike Moderson (OF-4) also joins the CCOE Team. Coming from Nienburg, Germany, where he is responsible for the equipment at the German CIMIC Centre (Zentrum ZMZ Bw), he will now organize the upcoming CMI Meeting through November. Additionally, he will support the CIC branch in further roles and functions. Before turning CIMIC, LTC Moderson enjoyed an exceptional Military career in the Division Special Operations as an airborne engineer. He has held various positions in related assignments including the one of Deputy Battalion Commander of the Combat Engineer Battalion 1. Over the past fifteen years LTC Moderson also served in many missions including the ones in 2000, 2001, 2005, 2009 and 2015.

Last, but not least, we welcome intern Laura Adèr to the CCOE. Laura has a Masters in International Relations and work experience in training and capacity building at the Clingendael Institute, as well as UNRWA. Her academic background and past work experience will suit her well in her new job at the Training & Education Branch of the CCOE. Laura’s main task will be to assist in the training requirement analysis.

Master Sergeant Michael Ian Handscombe (OR – 9) received his already 7th “Official Service Recognition” as a twenty-seven year veteran of the German Armed Forces. This time, he was recognized for his outstanding contribution to facilitate and institutionalize the pro-active engagement and mutual identification of the highly diverse participants’ landscape at the CCOE training courses.

Ralf Baur’s (OF-2) work has been commended for his innovative ways of thinking and his conceptual contribution to the future of the CIMIC Centre of Excellence (CCOE).

Dennis Müller (OR-8) was praised for his outstanding work as a course manager at the CCOE and his support beyond the call of duty outside of the CCOE.

Another highlight of the day was the promotion of Ed van de Bospoort to Lieutenant Colonel (OF -4). Ed works at the Lessons Learned Branch of the CCOE. His main project is to contribute to the optimization of the (NATO) lessons learned structure regarding CIMIC issues. Additionally, he is a key contributor to the “Urbanization Project” at the CIC Branch. Besides his hard work at the CCOE, Ed has his hands full with three young daughters at home.

Finally, Tilman Engel, German Army Reserves, serving in the in the Public Affairs Office of the CCOE, was promoted to Major (OF – 3), following his six month tour of duty in Afghanistan in 2014 and his staff officer work at the CCOE this year.