In March 2016 two new interns, Ms Monica de Astis (ITA) and Mr. Enzo Sebastian Aguilera (GER) joined the CCOE. The CCOE Internship Programme is part of our effort to seek academic innovation by improving its approach to civil academia and increasing visibility and awareness of the CCOE within the international community. 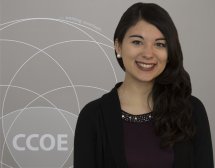 Ms MONICA DE ASTIS (23 years, Italy) has started an internship within the Public Affairs Office. Her main focus will be the general improvement of CCOE’s current website, the focal information point where CIMIC interested civilians and Militaries can meet and inform about CCOE and Civil-Military Cooperation. She will also support the Public Affairs Office in the organization of events and in other tasks.

Graduated in ‘International Studies and European Institutions’ in December 2014 at the University of Milan, with a thesis about the role of Europol against organized crime, Monica gained an internship at EUROPOL (European Law Enforcement Agency – The Hague) some months later. She worked for half a year in the Office of the Director focusing her attention on stakeholder management and cross-departmental cooperation.

In 2011 Monica started to collaborate with a local newspaper in Milan and, by working constantly on her articles, she became journalist. Besides current news, culture, local politics and economics she writes about anti-mafia and organized crime as well, both for her blog ‘Nomos&Caos’ and for specialized online magazines.

During her university career in Milan she studied ‘Sociology of Organized Crime’, subject of her final thesis and directly linked to her social activism: Monica is indeed part of the Italian anti-mafia movement, organizing and taking part to activities aimed at increasing public awareness of organized crime’s impact on society. 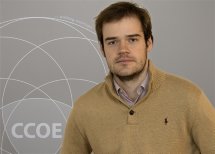 Mr. Enzo Sebastian Aguilera (GER) is conducting an internship at the Concept, Interoperability and Capabilities (CIC) Branch and the Legal Adviser (LEGAD) from March to April 2016. During this time he will review and propose updates on the Rule of Law Make Sense publication. Next to that he will further develop the factsheet on Rule of Law as one of the Cross Cutting topics identified by the CCOE.

The CCOE Internship Programme provides current students and recent graduates with the opportunity of professionally evolving through a conducted internship within the CCOE international community in The Hague, The Netherlands.