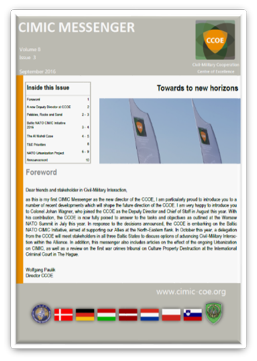 On September 27th, 2016 the third CIMIC Messenger has been issued.

Several times per year, the CIMIC Messenger will inform the CIMIC family and our civilian partners, as well as the interested public, about both relevant and current issues pertaining to the world of CIMIC, Civil-Military Interaction (CMI) and the CCOE.

as this is my first CIMIC Messenger as the new director of the CCOE, I am particularly proud to introduce you to a number of recent developments which will shape the future direction of the CCOE. I am very happy to introduce you to Colonel Johan Wagner, who joined the CCOE as the Deputy Director and Chief of Staff in August this year. With his contribution, the CCOE is now fully poised to answer to the tasks and objectives as outlined at the Warsaw NATO Summit in July this year.

In response to the decisions announced, the CCOE is embarking on the Baltic NATO CIMIC Initiative, aimed at supporting our Allies at the North-Eastern flank. In October this year, a delegation from the CCOE will meet stakeholders in all three Baltic States to discuss options of advancing Civil-Military Interaction within the Alliance. In addition, this messenger also includes articles on the effect of the ongoing Urbanization on CIMIC, as well as a review on the first war crimes tribunal on Culture Property Destruction at the International Criminal Court in The Hague.