In the West, the North-East or the South – this is CIMIC in 360 degrees

Two of the key organizations committed to NATO CIMIC, one in The Netherlands, and the other one in much warmer Italy. The one in the North-West focuses mostly on CIMIC Doctrine, Lessons Learned and with courses on all levels from the tactical to the strategic, while the other one specializes in preparing domestic and multi-national troops on the tactical and operational level.
The running Higher Command Course at the CCOE, provided for a unique opportunity to interview the visiting Director of the NATO Multi-National CIMIC Group. Colonel Marco Longo (ITA – A), with a long deployment career in the Balkans, in Iraq and Lebanon, took the lead of the NATO Multi-National CIMIC Group in Motta-di-Livenza in July 2016. 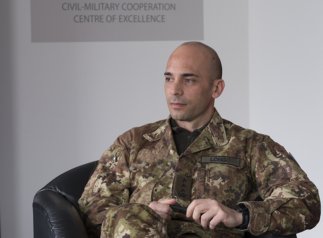 Q: “How was the NATO Multi-National CIMIC Group established?”

A: “Everything started in the late Nineties, when NATO urged nations to establish CIMIC units. Italy established its own one and then other Nations joined: this formed the basis for the initial CIMIC Group South, the equivalent to the CIMIC Group North, the predecessor to today’s CCOE. In 2009 it then became the Multi-National CIMIC Group (MNCG), the Italian Army Unit specialized in civil-military cooperation, which is now composed of six member states: Italy, Hungary, Romania, Slovenia, Portugal and Greece. More or less 450 people work there, including both the multi-national, the national and the support units”. 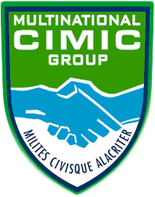 Q: “Which are the main activities of the MNCG? Are you more engaged in CIMIC out-of-area deployments or do you also deal with domestic CIMIC issues?”

A: “We have a double nature, so a double mission as well. The multi-national Headquarters (HQ) provides CIMIC capabilities to the institutions, which require them. NATO is the main one here: indeed, we provide training in CIMIC capabilities to Joint Force Command (JFC) Naples and JFC Brunssum on a constant basis. We have ten types of courses, mainly focused on the tactical level, including one on female engagement in the field of operations.
On the national side, we are now involved in eight theaters of operations, led by different actors, such as the United Nations, NATO and the European Union”.

Q: “Which are the main challenges for CIMIC in southern Europe?”

A: “The main challenge for us is the training and education process behind the deployments. We strongly focus on cultural awareness, mediation capacity and language proficiency, which are all basic aspects for successful missions”.

Q: “To what extent do you consider our work – the one done here in The Hague and yours, in Motta di Livenza – similar, and at the same time where do we differ?”

A: “I consider our work complementary: we have different roles and missions, but in the end the mission of CIMIC is the same. We both conduct courses, yet the CCOE is our main reference for developing our activities in line with NATO standards, and to prepare the troops in the way we are expected according to the same standards. Doctrine and policy guidance are not our tasks, as we work primarily on mission preparation. We also conduct training and education on behalf of the CCOE, in particular by holding NATO Field and Staff Courses. This confirms the strong relationship and synergy between our two partner organisations”.

Q: “One last question: how do you expect the role of CIMIC to develop in the next years?”

A: “We already see many related developments. The nature of conflicts is nowadays changing and CIMIC is an enabler for Commanders to be effective on the ground in any of these new scenarios. Our troops must be able to adapt themselves and to engage in all kinds of scenarios. This is where CIMIC plays a key role even more in the future”.

Dear Colonel, many thanks for the interview.