It is one of the first warm days in The Hague. Yet a team of the two responsible editors, different CIMIC experts and graduate students from Leiden University shun sun and daylight to keep one of the most ambitious projects of the CCOE on track.

The pending 2017 publication “A Civil-Military Response to Hybrid Threats”, will combine the up-to-date synthesis of everything there is to know about measures, strategies and approaches to counter the ever increasing wave of hybrid threat on the Western and liberal societies.

Under the guidance of the editors Dr. Eugenio Cusumano and CCOE counselor Marian Corbe, the twelve chapters of this book have been initiated and collected from a wide variety of experts during the last 18 months. However, where the work of the author ends, the labor for the editor publisher just starts.

In order to stick to the narrow publication deadlines, necessary to present printed copies in time for the 10 Year Anniversary of the CCOE in October this year, 240 pages of scientific content had to be reviewed for consistency of content, style, language and source quoting within just two strenuous days.

For two members of the editing team, Lala Mustafazade (29, a Master in Crisis and Security Management at Leiden University from Baku, Azerbaijan) and Fatin Mekdad (23, Lebanon International University, Master International Relations at Leiden University), these two days turned into an experience of its own. Starting every day at eight a.m. – and concluding some twelve hours later – the shared review and the group discussions on testy topics, kept the group pulling through, fired up by the inevitable heavy intake of caffeine and sugars. 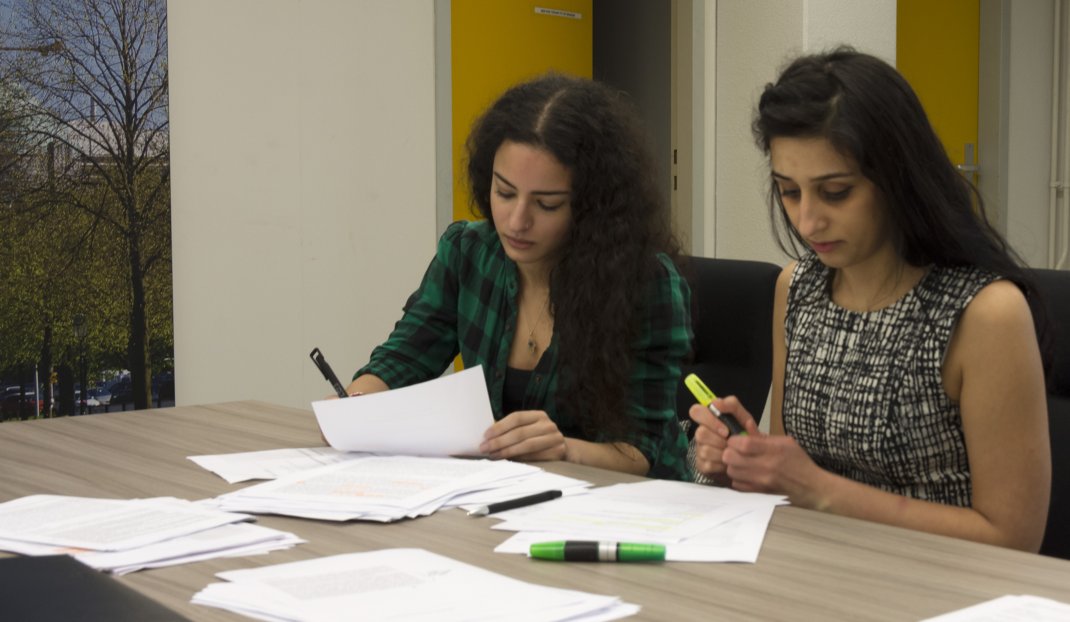 Despite having a relevant content background of her own, as well as previous editing experience, Fatin admitted to having dozed-off several times during process. “The work load was so intense”, she said. “Usually, it takes about one day to review a chapter. This time we had to do three in one day.”

At 8.000 words each, some chapters proved to be more of a challenge than others. “At times, it turned quite into a challenge to literally translate acronym heavy Military jargon into a language, which could be understood by general readers,” added Lala.

In the end, both valued the experience and the knowledge gained, yet rejected the notion to turn high-speed extended editing into a profession: “too intense”, they concluded. Still, the session reaped some significant benefits for the future academic development of both. “This high-speed editing helped me to become more critical with my own work. It sharpened my perspective and made me confident to critique and alter content, or wording, where necessary”, said Lala.

At the CCOE, Fatin had been involved with a military organizations for the first time. She was impressed by both the civility and the displayed discipline of this environment. The book, “A Civil-Military Response to Hybrid Threats” will be published by Palgrave MacMillan in 2017. We will keep you posted on further information on availability and pre-subscription.